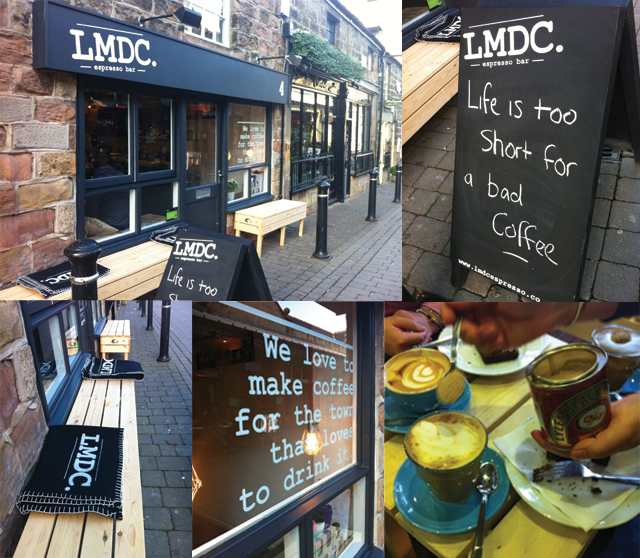 This new artisan espresso bar was launched by a local business man that had been used to selling coffee via a mobile coffee shop that frequented trade shows and events. Realising the potential and value of really good coffee, and using his tried and tested business acumen, he has given considered time and thought to creating a new coffee shop service. And fair play, it looks like an investment that could do really well in Harrogate. So what can we glean from the service and the brand...

The staff were really clued up and answered all my questions about the how, why and what. They were a really nice bunch of people. The one chap had baked some of the fruit bread himself and he writes something different on the blackboards outside every day. Something quirky and fun – 'Life is too short for a bad coffee' - totally agree!

The interior was reminiscent of something between a Swiss ski hut where you might drop in for some hot wine and a Swedish sauna! The blankets on benches outside were a nice touch for a cold Sunday in November!

The coffee was amazing. The beans were Square Mile coffee brand and the coffee machines and grinders were right posh... the most expensive on the market.

Sugar is served in Tate & Lyle treacle jars – a nice touch. The benches were a little uncomfortable and hard – but padded with beautiful sack cloth cushions from Eliza-Beth Design which softened the blow a bit! I like it – it's been thought about and designed.

It was very close quarters with everyone else sitting near, it's get in, have coffee – recharge and get out again, rather than lounge around for hours. We stayed for ages anyway!

Wonder if they will do mulled wine for Christmas?!